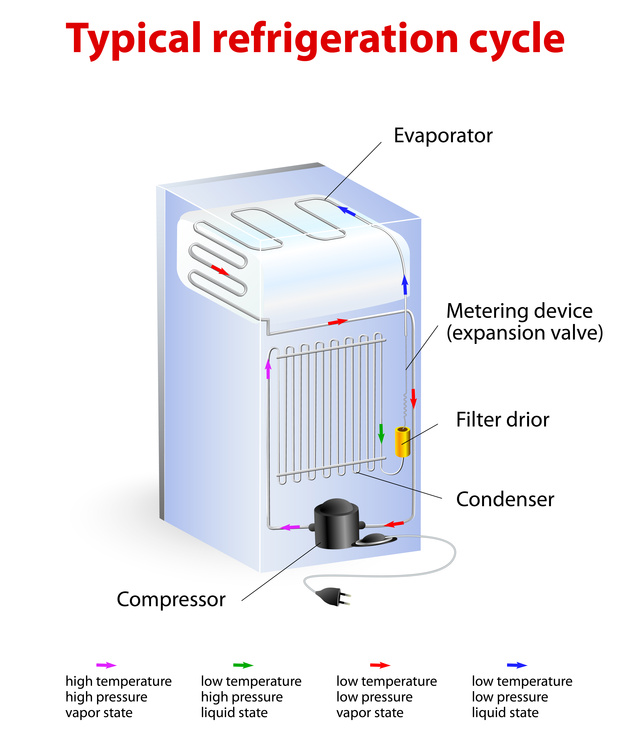 From its humble beginnings in 1914 when a Detroit, Michigan engineer named Nathaniel B. Wales unveiled a prototype for a refrigeration unit that was both practical and that used electricity, to today, the refrigerator has become an item of necessity. By 1916, Alfred Mellowes had invented a refrigerator that was self-contained and that featured a cabinet with a compressor on the bottom. Most households use units that feature a vapor compression cycle,.

The refrigerant systems of today tend to be based on compression and are cooled by air. This essentially means that they exchange heat by using air. The compressor’s job is to compress the vapor, which then leaves the unit in the form of high-pressure vapor that is superheated. This is the basic process that occurs in all different types of refrigeration compressors.

One of a number of refrigeration cycles that modern cooling units use today is vapor-compression refrigeration. In addition to being a common way for refrigerators to do their job, vapor compression is also often used to run the air conditioning units of automobiles and buildings. A liquid refrigerant is circulated throughout the unit. During this process, that medium both absorbs the heat and removes it from the area that is to be cooled before being released elsewhere.

When describing commercial refrigerator units, the location of the compressor or motor and its relation to the area that contains the refrigerant is often referenced. They are typically differentiated into three groups: semi-hermetic, hermetic or open.